CSA BLOG...
thoughts and reflections from the CSA Faculty

You're on a Roll! 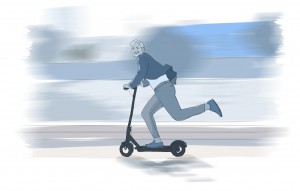 One leader was peer-coaching another leader. Each came from a different company. Let’s call them Johan (coach) and Christina (coachee). Christina had an important challenge to put on the table. She had a direct report (I’ll call him Harry) who found it extremely difficult to say no to requests. Because Harry kept saying ‘yes’, and because his work was of such high quality, he’d ended up with too much on his plate for too long. Christina was worried that he was perilously close to a severe burnout.

Johan asked Christina: “What signs do you see that give you the idea that Harry’s on the edge?”

Silence followed, and Johan was getting uncomfortable, so he continued with, “I mean, is Harry looking more tired? Or, is he getting overly emotional? Or, does he act depressed, or something?”

Instead of answering the initial, open question from Johan, Christina found herself reacting to Johan’s (limited) menu of options that had followed.

I was in the room because Johan and Christina were participants in a 9-month program JJC offers called 'Coaching is an Art', which focuses on bringing leadership to the next level by developing coaching skills.

We had quite the debrief discussion about that particular moment, afterward.

What emerged was that:

Coaches, when you ask an authentic, open, and thought-provoking question, and it is followed by silence – YOU’RE ON A ROLL!

One could even hypothesize that there is a positive correlation between:

Coaches, take the silence following your question to be one of the biggest compliments you could receive! You’ve just produced the conditions for creative sparks.

So, let your question land with your coachee, sit there in (extended, and hopefully relaxed) silence, and watch those sparks fly!

With a career in coaching and leadership development that began in the early 1990’s, Julie Johnson is among the most experienced coaches and facilitators in Europe. She has worked with thousands of individuals from over 50 countries across six continents. She teaches leadership at Rotterdam School of Management’s Executive MBA program.